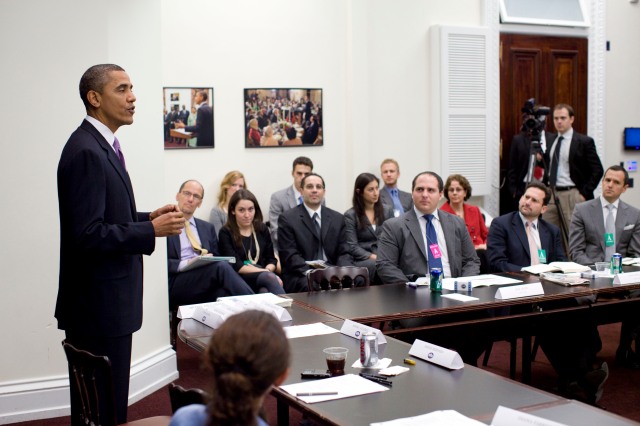 On Sunday, 60 minutes aired the first one on one interview with President Barack Obama after his party’s debacle in the most recent election. Questioned by Steve Kroft, Obama acknowledged he might have lost his “mojo” and let his adversaries define him and the narrative of the first two years of his administration.

To this, President Obama answered the following:

“I think that’s a fair argument. You know, I think that over the course of two years we were so busy and so focused on getting a bunch of stuff done that we stopped paying attention to the fact that we – yeah, leadership isn’t just legislation. That it’s a matter of persuading people. And giving them confidence and bringing them together. And setting a tone. We haven’t always been successful at that, and I take personal responsibility for that. And it’s something that I have to examine carefully as I go forward. I will say that when it comes to some of my supporters.”

Obama later went on to address how media and people in general have criticized his appearances in shows like The Daily Show, The View or America’s Most Wanted. But behind this, he said, is an effort to reach those who don’t consume regular news media.

“But there are a whole bunch of folks who watch The Daily Show¸ or watch The View. And so I’ve got to adapt the presidency to reach as many people as possible, in as many settings as possible so that they can hear directly from me. You know, but this is an example of where you know, on the one hand folks say, “Well, you know he’s a little too remote.” Then if I’m on The View, “Well, you know, he shouldn’t be, you know, on some daytime TV show. My attitude is if I’m reaching people, if I’m talking to them, I’m willing to take the risks of overexposure on that front.”

It is no news that Democrats running for office failed at taunting what they had done in the past two years, something that even president Obama found himself guilty of.

Let’s remember that during the campaign the then-candidate proved to be resourceful when it came to reaching out constituencies through the array of social media on the internet.

But after two years the campaign seemed to have gone awry and was perfectly nullified with the conservative agenda.

To fight back, team Obama was getting ready just a few days before the electoral downfall—they were probably aware of what was in store for his entire agenda—.

In the weeks before Election Day, the Obama administration set at least two Online Summits with minority bloggers. The Friday before the election, the White House First Hispanic Online Summit convened to hear about what the administration had done so far in education, economy, health care and other areas.

It was an encounter that had to happen. And when it happened, most of it was off the record! In a brief appearance, President Obama star-struck most of us but I could gather the sense of need the White House has to better outreach the Latin@sphere.

Two years too late, some may say. But with his presidency at stake, it was about time for us to sit down and hear there’s a will to share information and optimize the translation of materials Spanish-speaking people may need to keep with what the President is doing amidst the bipartisan tragedy we’re stuck with.

was born in Texas, brewed in Mexico City, seasoned in the Mexico-United States border, aged walking the streets of Philadelphia. He had a short-lived stint eating grits, fried chicken, and peaches in Atlanta. He later became a béisbol writer for El Diario de Nueva York. He has written about immigrant communities in English, Spanish, and some Spanglish. Although he does not have a shelf full of awards, Gustavo has received thank you notes and hugs from people who have trusted him with their stories. His work has appeared in Voices of New York, El Diario/La Prensa, Dallas’ Al Día, The Philadelphia Public School Notebook, Philadelphia Weekly, Radio Bilingüe, Latina Lista, Spot.us, among others. He is currently pursuing a master's degree at the CUNY Graduate School of Journalism.
View all posts by Gustavo Martínez Contreras →
This entry was posted in Commentary and tagged current affairs, democrats, elections 2010, Hispanic, Latin@sphere, Obama, republicans, White House. Bookmark the permalink.